Iron Road Limited (Iron Road, ASX: IRD) is pleased to advise that the Premier of South Australia, the Hon Jay Weatherill MP and the Minister for Mineral Resources and Energy, the Hon Tom Koutsantonis MP, today announced the granting of the two key approvals required for the Central Eyre Iron Project (CEIP).

The CEIP has generated significant momentum towards financing and construction, with the rail and port components declared a Priority Project by Infrastructure Australia in September 2016, and three major Chinese banks formally indicating in April 2017 lending appetite for the CEIP’s requisite debt financing. Progress has been backed by a strong relationship with strategic partner China Railway Group Limited (CREC). 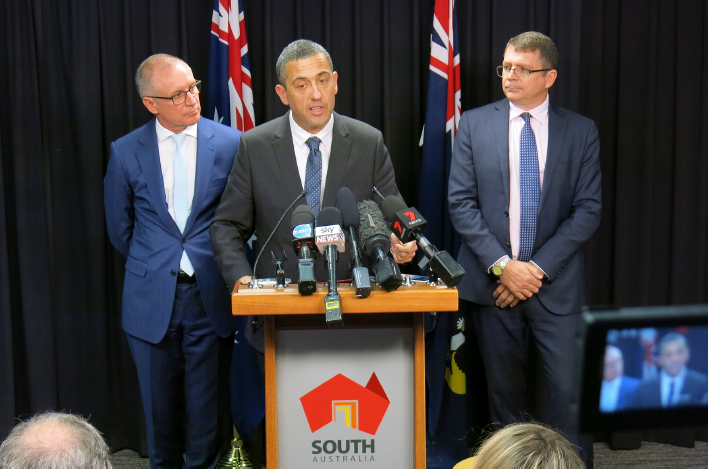 The Hon Jay Weatherill MP, Premier of South Australia, the Hon Tom Koutsantonis MP, Minister for Minerals and Energy, and Mr Andrew Stocks, Managing Director of Iron Road Limited at the press conference held earlier today in Adelaide where the key approvals for the Central Eyre Iron Project were announced.

Iron Road Managing Director Andrew Stocks said that he was delighted to receive the two primary South Australian approvals for the CEIP. “The CEIP will employ approximately 1,950 people during construction and 700 during operations, all located on the Eyre Peninsula, in addition to the workforce required in the Adelaide head office.

“The approvals we have received are a direct recognition by the South Australian Government of these and other significant direct benefits for the State.
“We are now looking forward to the next stage of our development journey which will include further engagement with stakeholders, preparing our secondary approval applications, reaching a Final Investment Decision together with CREC and ultimately achieving financial close”, Mr Stocks said.

CREC’s senior representative responsible for the project, Mr Cai Zemin said, “We are pleased and excited that this major milestone for progressing the CEIP has been achieved. It demonstrates the strong joint commitment of CREC, Iron Road and the South Australian Government to the construction and operation of Australia’s next major mining and infrastructure project; one that will have a significant impact on the strength of the mining sector in the State.”

The only remaining primary government approval for the CEIP is under the Commonwealth environmental legislation. The Commonwealth Minister for Environment and Energy will consider the assessment report provided by the South Australian Government with a decision expected to be announced within weeks.

Formally, the authorisations granted by the South Australian Government are in response to Iron Road’s applications for a Mining Lease (ML) under the Mining Act, 1971 (SA) and Development Authorisation under the former Development Act, 1993 (SA) (Development Act), both in relation to the CEIP.

On 3 May 2017 Minister Koutsantonis granted the ML for the Company’s proposed magnetite mining and minerals processing operation (CEIP Mine) near Warramboo on the central Eyre Peninsula for a term of 21 years. The CEIP Mine will produce at least 21.5 million tonnes per annum (Mtpa) of high grade, low impurity iron concentrate.

Concurrently, His Excellency the Honourable Hieu Van Le AC, Governor of South Australia, on advice from Executive Council, granted Development Authorisation for the infrastructure components of the CEIP (CEIP Infrastructure). The CEIP Infrastructure comprises a deep sea port at Cape Hardy, approximately 7km south of Port Neill, a railway line from the mine to the port, a power transmission line, borefield with an associated water pipeline, and a long-term employee village at Wudinna.

The deep water port and substantial heavy haulage railway will be a first for South Australia and a profound improvement on the Eyre Peninsula’s existing infrastructure base, with the export and import infrastructure expected to become a strong catalyst for further development in the region. Iron Road’s intent to allow third party access to the Cape Hardy port facilities was recently set out in the successful Registration of Preliminary Interest process run by Regional Development Australia Whyalla and Eyre Peninsula on behalf of the Company.

Iron Road’s April 2017 announcement regarding debt financing expressions of interest received from major Chinese banks was a breakthrough milestone for the Company, indicating credible near-term project financing prospects. CREC’s 10Mtpa of high quality iron concentrate offtake, proposed equity investment at both the Iron Road and project levels, together with the provision of a Project Completion Guarantee, were key factors identified by the financial institutions that was driving their strong support and appetite to lend.

The ongoing partnership between Iron Road and Emerald Grain, a subsidiary of Sumitomo Corporation, is also important in ensuring maximum benefit is realised for local communities and farmers by offering choice and a more competitive market in relation to the export of grain.