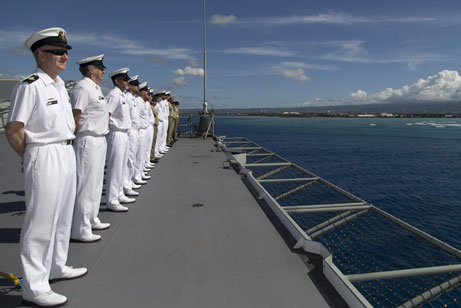 Minister Pyne said these briefings would provide regional Australians with an opportunity to learn more about the Government’s $89 billion national shipbuilding endeavour.

“The industry briefings will focus on the next generation of naval surface ships; specifically the Future Frigate and Offshore Patrol Vessels, which represent a $39 billion investment by the Australian Government,” he said.

“The Future Frigate and Offshore Patrol Vessel programs will directly create over 2500 jobs for Australians indirectly supporting the jobs of many thousands more.

“To ensure this occurs, it is critical that we provide Australian companies with opportunities to enter the supply chain.

“Where possible and practical, Australian companies should have the opportunity to benefit from the economic advantages of a thriving domestic defence sector.

“Importantly, this will contribute to the ability of the Australian Defence Force to respond to our national security requirements,” Minister Pyne said.

Industry participants will be provided high level updates on the progress of the two shipbuilding programs and how they can get involved through registering with the newly-launched Centre for Defence Industry Capability (CDIC).

“The CDIC is a partnership between Defence and the Department of Industry,  Innovation and Science to support Australian industry by offering practical advice and assistance needed to work with Defence,” Minister Pyne said.

“Almost 400 businesses have registered for shipbuilding updates through CDIC’s portal to date.”

The Offshore Patrol Vessels are due to begin construction Adelaide in 2018 and will move production to Henderson, Western Australia in 2020.

The Future Frigate program is slated to begin construction in 2020 in Adelaide.

Regional briefings will be held in the following locations:

The Whyalla briefing scheduled for 4th May, 2017 will include:

The Government is committed to maximising the opportunities for Australian industry to participate in these two surface ship programmes, together worth more than $38 billion.  The Department of Defence hosted a number of Naval Shipbuilding briefings in Australian capital cities in late 2016 and will be hosting briefings in regional cities in April and May 2017.

To attend one of these briefings please register at:
https://www.eventbrite.com.au/o/department-of-defence-11842283748