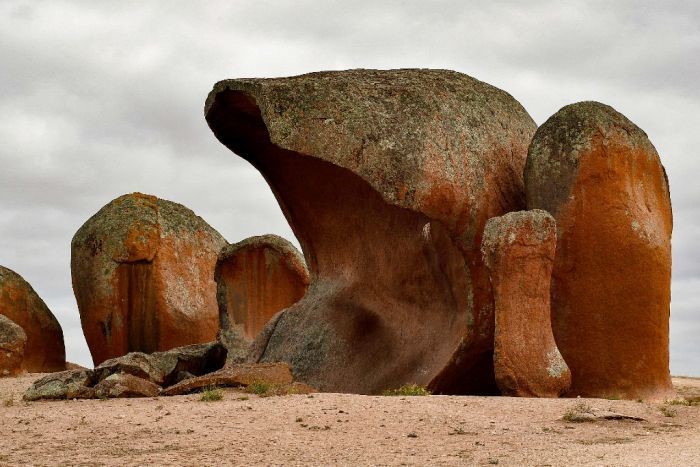 Driving from Port Lincoln to Ceduna on South Australia’s Eyre Peninsula you can easily miss them.  And if you do, you would have passed the opportunity to see some of Australia’s oldest rocks, which academics say are very slowly eroding away.

Murphy’s Haystacks are a group of wind-beaten rocks sticking up prominently from the top of a hill on private property, about 40 kilometres south of Streaky Bay.

The rock formations got their unusual name from a Scottish agricultural expert, who championed the need to harrow land to produce hay, according to an information sign at the site.  He saw the formations in the distance and told travel companions that they were haystacks and that the person who owned the land must harrow their land.  At the time the owner of the property where the rock was located was Denis Murphy, hence the name Murphy’s Haystacks.

Associate Professor Victor Gostin, a visiting research fellow at the University of Adelaide, said Murphy’s Haystacks were a type of inselberg, which means ‘island rock’.

Other inselbergs found across the country include Uluru in the Northern Territory and Wave Rock in Western Australia.

He said hard granite was left behind after softer materials rotted and weathered away.

“It’s that part which sticks up as the haystack.

“The surrounding parts which have weathered into clay, erode and that leaves behind the hard, central parts.” 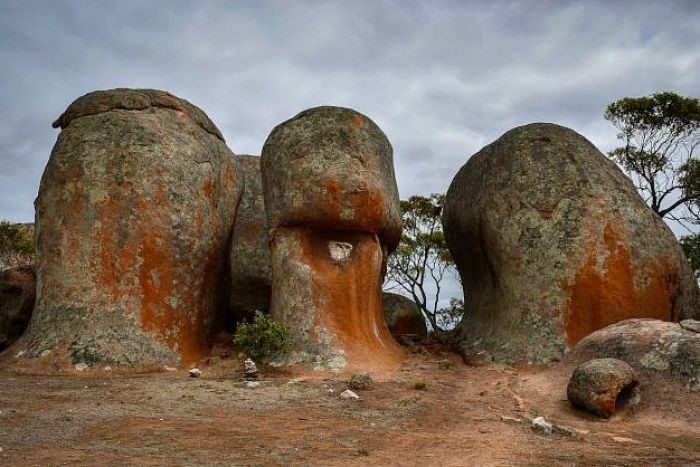 Dr Gostin said Murphy’s Haystacks were among the oldest rocks in Australia.

“They’re 1,600 million years old, which is about the average age of the younger parts of Eyre Peninsula,” he said.

“The actual granite itself is very ancient but the form of the Haystacks is much more recent so you can probably go back to the time of the dinosaurs and the weathering of the landscapes.” 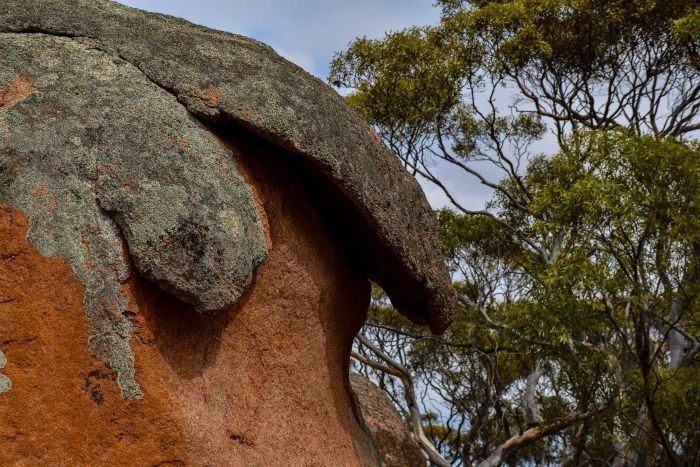 Dr Gostin said the Haystacks were weathering away and would likely be gone in another billion years.

“It’s all differential weathering, parts which remain are the harder parts because they haven’t been attacked by weathering or they’ve hardened secondarily,” he said.

“In other words, they’ve been hardened by an additional process of having silica cementing the grains together, which creates a crust.”

“It’s probably a combination of the climate, and having a pretty flat landscape.”

Dr Bestland said the Eyre Peninsula had “low intensity” rain, so the rocks were not eroded by heavy rainfall.  He added that the area was “tectonically inactive”, meaning the region was not affected by the movement of tectonic plates.

“It’s very stable, there are no real earthquakes that are moving the rock up or down,” he said.

“There are lots of different places in the world you can go and see these kinds of features.”

Murphy’s Haystacks have been owned by the same family since the early 20th century.

Denis Cash, Mr Murphy’s grandson and the current owner, was instrumental in opening the inselbergs up as a tourist destination.

“My immediate reaction was, ‘No, I don’t want to open them up’ because of the risk of fires, rubbish, graffiti,” Mr Cash explained.

But he said allowing the public to access the rocks was “one of the greatest things” his family had done.

“There was a lot of demand from the public to get better access.

“People walked right across the paddock to the rocks before we opened them up.

“It’s such a wonderful thing to be able to share what we’ve got with the world.”