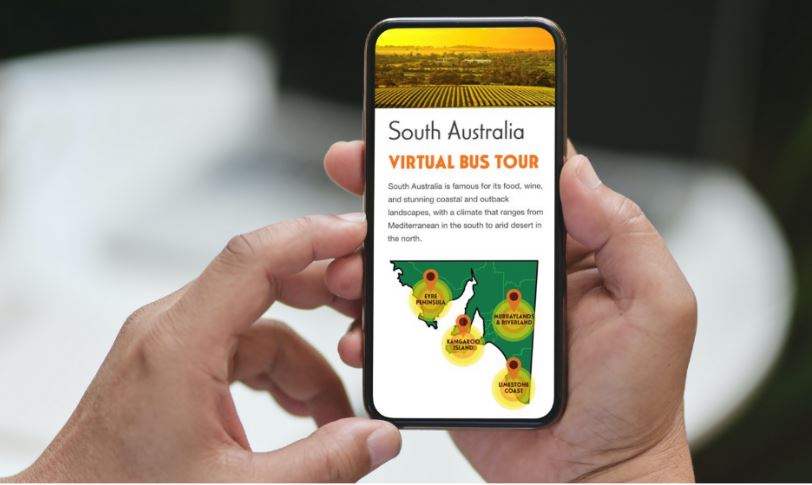 Three Eyre Peninsula farmers have shared their experiences of precision agriculture as part of an online roadshow produced by the Society of Precision Agriculture Australia (SPAA).
The Virtual Bus Tour, funded through the Eyre Peninsula Landscape Board Grassroots Grants Program, was developed to give farmers and other interested landowners access to the stories of these farmers without having to leave home.
The farmers are Chad Glover, of Yeelanna, Tim Polkinghorne, of Lock, and Bruce Heddle, of Minnipa.
Chad is a fifth-generation grain grower using precision agriculture (PA) tools and techniques to correct pH and soil structure. This has allowed him to focus on two of his most reliable and highest value crops, wheat and lentils.
Chad advises farmers interested in using data to improve their enterprise to start with the basics: conduct a program of thorough soil testing, map it, and ground truth it.
“Some of that data, like pH levels, won’t change very much unless you actually go and do something to the soil,” he said. “Soil type and texture won’t change. Once you’ve got that data, you can go and make decisions based on it that can help benefit the farm and improve the system.”
Tim is in a family partnership growing cereal, canola and legume crops, and producing fine wool from a flock of Baderloo-blood Merinos.
His father, Andrew, began their foray into PA in 1997 when he bought a Morris air seeder, which allowed the operator to manually vary seed and fertiliser rates.
“While it’s fairly novice in a PA sense, it was fairly innovative back in 1997 to be upping seeding rates and fertiliser rates on sand hills, where you’d otherwise have poor or scattered germinations of crops that got cut off by the wind,” Tim said. “I guess that’s how it started. I wouldn’t say we’re at the forefront of PA at all … but our weak areas are now quite obvious.”
Bruce uses PA in both the cropping and fine wool operations of his farm. The data enables him to choose more suitable crop types and varieties, and optimise inputs.
“Putting the right crop onto the appropriate land type reduces risk and increases reward,” Bruce said. “Matching nutrition to demand, especially nitrogen, puts the input where it’s most needed to increase yields, while reducing the risk associated with over-fertilising soil types that will not respond positively.”
SPAA executive officer Nicole Dimos said government responses to the COVID-19 pandemic had made it more difficult – and in some cases impossible – to run popular traditional in-person events such as field days and farm walks.
“We know farmers love nothing better than to visit other farms,” she said. “They enjoy seeing what’s working and what isn’t, and hearing other farmers talk about the lessons they’ve learned. The Virtual Bus Tour aims to capture some of that experience in a format that’s available to anyone with internet access at any time of day or night.”
Dr Dimos said the adoption of precision agriculture tools and technologies presented an opportunity for all farmers to make efficiency gains and savings, regardless of whether they’re involved with cropping, livestock or horticulture.
“Precision agriculture is not just about improving productivity, it also brings environmental benefits that help ensure farms remain sustainable,” she said.
As well as hosting the Eyre Peninsula stories, the Virtual Bus Tour will be expanded to include ‘stops’ at farms in the Limestone Coast, Kangaroo Island and Murraylands/Riverland regions.
The Virtual Bus Tour can be viewed at Virtual Bus Tour
This project is supported by the Eyre Peninsula Landscape Board’s Grassroots Grants program, made possible by the regional landscape levy.