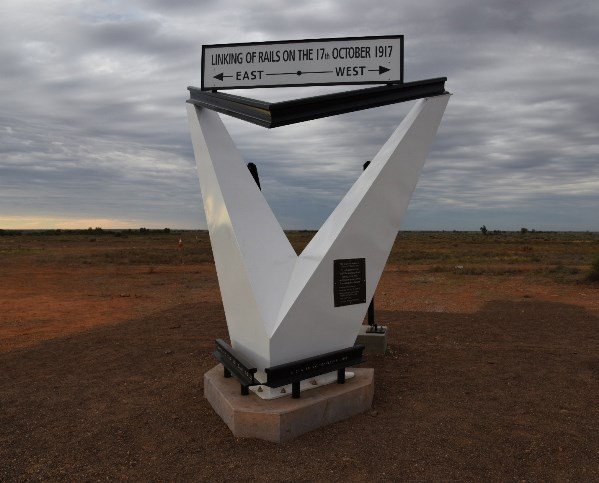 Regional Development Australia Whyalla and Eyre Peninsula (RDAWEP) worked in partnership with the National Railway Museum, in Port Adelaide, to coordinate the celebration of the 100th anniversary of the Trans Australian Railway (TAR) line construction. The celebration was held at a remote site on the edge of the Nullarbor Plain, near Ooldea, on Tuesday 17th October 2017.

The TAR was completed on 17th October 1917 when the rail lines constructed simultaneously from Kalgoorlie in the west and Port Augusta in the east were linked at 1.45pm, at a site approximately 4kms west of Ooldea.

This was a momentous occasion in the history of Australia. The TAR provided nation-building infrastructure that not only linked the east and west coasts of Australia, but also provided a platform for successful negotiations to encourage Western Australia to join the Commonwealth of Australia and establish the Australian Federation. The railway line provided a supply chain to outback areas of Western Australia and South Australia; and was particularly important for developing the land west of Port Augusta.

The TAR construction was an incredible achievement given circumstances at the time. Most of the work occurred during WW1 when communications, men, machinery and materials were scarce.  The work was manually intensive using horses and camels, and the line was built across a remote, vast, dry and desolate environment. The project entailed complex and difficult management, operational and supply logistics.

The importance of the TAR was recognised in 1967, when a 50th anniversary of the linking of the rails was celebrated on 17 October 1967 at the exact time and place where the rails were joined in 1917.

The 50th celebration attracted approximately 120 people. The official party travelled to the site by a special train. The event included the unveiling of two identical commemorative monuments, designed and built by the Commonwealth Railways, which were placed north and south of the rail line. The structure of the monuments was largely comprised of timber, which was not sufficiently robust to withstand the environmental conditions.  The monuments gradually deteriorated and had collapsed by the early 2000s.

The primary objective of the TAR centenary event was to replace the monuments.  Numerous replacement options were investigated after the National Railway Museum Executive Officer, Bob Sampson, released a discussion paper about this need in July 2015.

Subsequent negotiations between the National Railway Museum and the Australian Rail Track Corporation (ARTC) – the owner and operator of the TAR – were fruitful. ARTC constructed replicas of the 1967 monuments in steel from the original plans, which were unveiled at the centenary celebration.

RDAWEP became aware of the pending centenary in September 2016, and supported the National Railway Museum to coordinate the event.

RDAWEP, as the agency responsible for driving regional economic development across the Eyre Peninsula, appreciates the importance of the infrastructure investment made by early settlers and previous generations. RDAWEP helped coordinate the event to ensure that the community and economic benefits resulting from the TAR infrastructure legacy would be appropriately acknowledged.

The coordination was a shared responsibility. The National Railway Museum provided historical information and managed the official guest list and invitations. RDAWEP prepared publicity articles, and managed the budget, attendee registration database, and the project communications.

The RDAWEP Board agreed to under-write the event with up to $10,000 to ensure that it would proceed. RDAWEP also contracted Leon Ashton, the former manager of Maralinga Village, to undertake the on-site event coordination and management of logistics.

The 100th anniversary was publicised in key articles in the rail industry Track and Signal Magazine, RM Williams Outback Magazine, and the RDAWEP Regional Newsletter.  Various 4WD websites, such as Westprint, also supported the project and publicised the event to members.

Even though the celebration was going to be held in a very remote location, approximately 370kms north-west of Ceduna, there was an overwhelming response from people to attend the celebration.

In the week prior to the centenary – i.e. early October – 400 people and over 190 vehicles were registered on the event database.  Most of the attendees were towing off-road caravans and camper trailers and intended to camp on site.

The influx of such a large number of people to a remote location created logistical challenges. At the beginning of the project, the likely participation was unknown, but it soon became apparent that the numbers would exceed expectations. Arrangements were consequently made to enhance visitor amenity and safety. This included: strategies to provide portable toilets, power, PA systems, water and firewood; and communications and meetings with numerous groups to resolve logistical issues, including:

These negotiations were conducted by the Event Coordinator, Leon Ashton on behalf of the National Railway Museum and RDAWEP.

The provision of services and infrastructure magnified the project costs.  The project was able to proceed due a sponsorship of $10,000 from Dick Smith Foods, $1,000 from the Arkaroola Wilderness Sanctuary, and under-writing by RDAWEP.

No government funding was sought or offered for the event; and the provision of donations, reduced rates for services, and volunteering were critical.

The TAR Centenary was held on 17 October and approximately 400 people attended.  The ceremony was emceed by Bob Sampson from the National Railway Museum, and included talks by Sharon Yendall and Mima Smart (Maralinga Tjarutja), Dion Dorward (RDAWEP), Tim Ryan (Executive General Manager of ARTC), and Dick Smith, the major event sponsor.  A statement from the Minister for Infrastructure, Darren Chester, was read out during the ceremony by Dion Dorward. 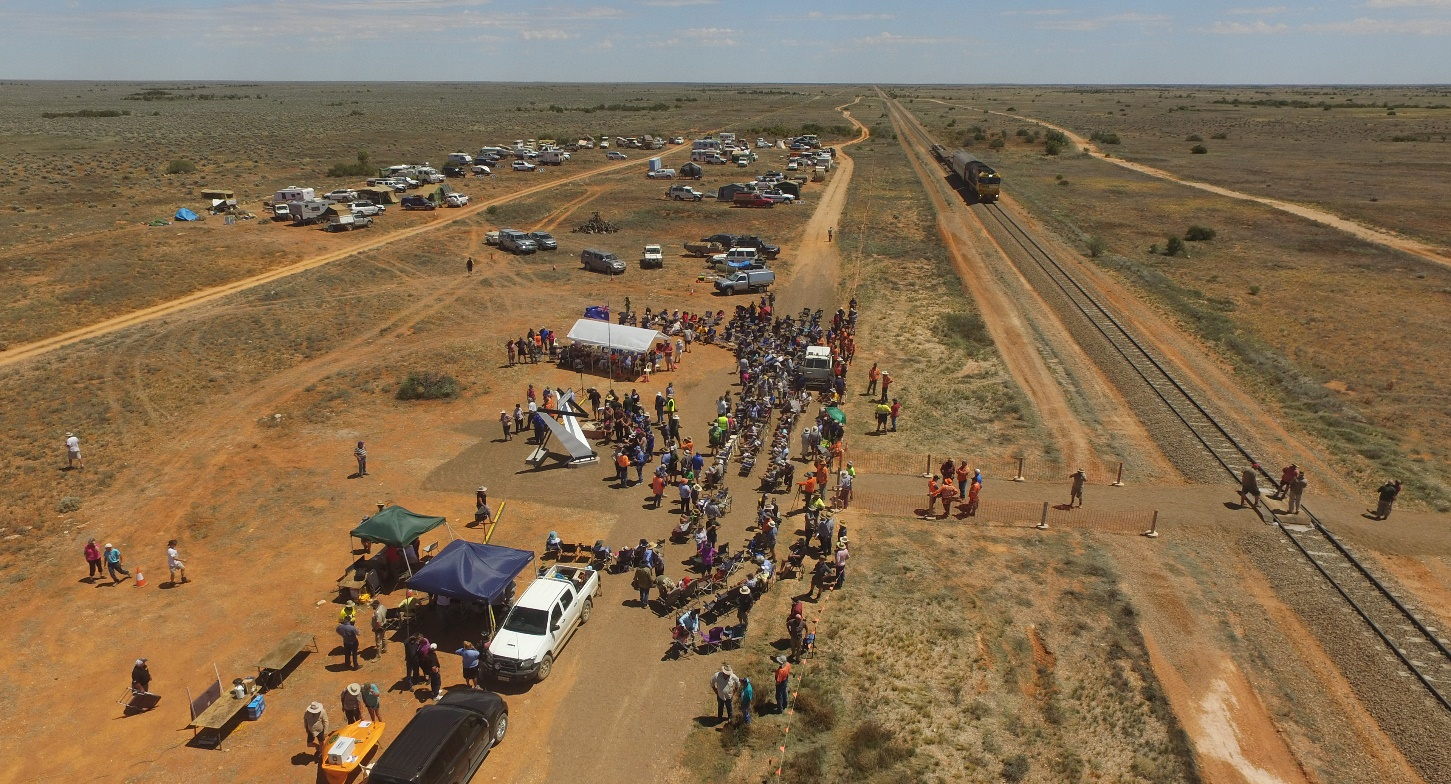 SA Musician, Mike Roberts, sang his song– Bands of Steel – about the railway line and launched his CD of the same name at the ceremony.

The program was timed so that Tim Ryan and Dick Smith unveiled a plaque on the southern monument at 1.45pm, the exact time that the railway lines were linked on 17 October 1917.  The monuments and plaque will leave a lasting legacy of the TAR and the organisations involved in coordinating the 100th anniversary. 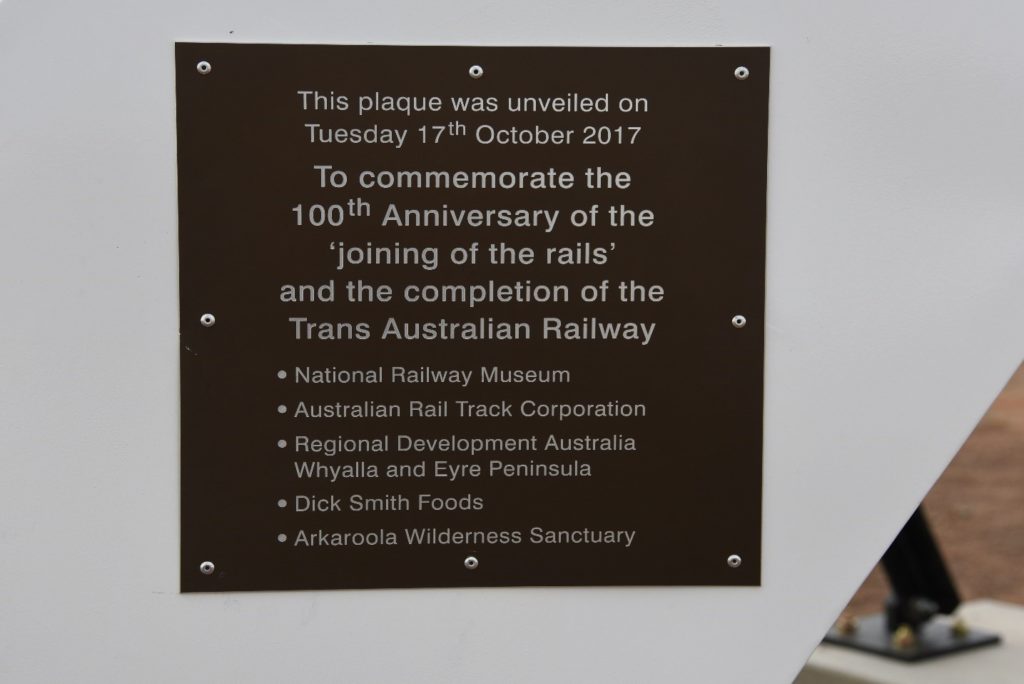 The event attracted news items on the Channel 9 News on Sunday 8 October, and Channel 7 News on Saturday 21 October.

There was a flurry of requests for follow-up articles about the event, with information and photographs provided to the West Coast Sentinel, Port Lincoln Times, Eyre Peninsula Tribune, and Track and Signal Magazine, with additional information provided for the RDAWEP Regional Newsletter and community newsletters at Streaky Bay and Quorn.

Mike Roberts wrote, recorded, performed and produced a CD that was sold at the TAR celebration. He still has CDs of this special commemorative edition (and now download cards for those who prefer) available for sale. CDs are $15+postage and Download Cards are $10. In addition to Bands of Steel, the CD contains four other new original songs that Mike performed at the concert on the Monday night. 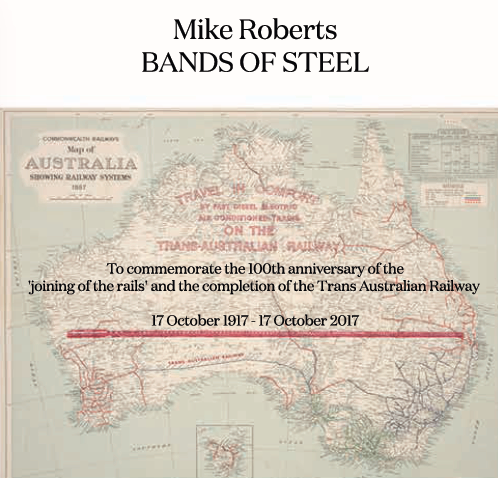