A massive investment in Pumped Hydro storage technology is just one of many potential projects Sanjeev Gupta has announced as part of a portfolio of ambitious projects being considered by GFG Alliance.

The big news last year was the acquisition of the Whyalla Steel Plant and the committed $1 billion upgrade. This year, Mr Gupta is again making big-dollar plans with a range of ambitious projects targeting Whyalla in particular, but also South Australia and interstate.

Steel Plant Investment
Plans are being finalised by Liberty Onesteel to determine exactly what the promised $1 billion upgrades will look like.  Mr Gupta is suggesting a massive investment in technology upgrades to the plant targeting high-grade added value steels and an overall capacity increase.

At an SA Chamber of Mines and Energy dinner in Adelaide on 30 May, Mr Gupta said he was investigating the possibility of building a copper smelter and refinery in Whyalla.  Mr Gupta described the plan as strongly viable and he would be in a position to release more details before the end of the year.

Find out more at the 14th GMUSG Conference and Trade Expo to be held in Port Augusta 28 – 30 August.  GFG Alliance has committed to providing a guest speaker to present at this year’s conference to provide a complete rundown on the group’s investment plans and upcoming projects.

The meteoric rise of Sanjeev Gupta’s GFG Alliance to global prominence has been recognised in front of the world’s metals industry leaders by the award of a coveted international accolade.

GFG was declared the winner of the prestigious ‘Rising Star Company’ title at the annual S&P Platts Global Metals Awards celebration dinner held at the Marriott in Grosvenor Square, London.

The event is regarded as the world’s showcase of excellence in an industry worth more than US$1.8 trillion a year and winners were chosen from among nearly 100 finalists from all continents by an independent panel of experts representing all aspects of the sector internationally.

GFG’s success in the keenly-contested ‘Rising Star Company’ category follows Sanjeev Gupta’s CEO of the Year win in 2017 at the same event.

The ‘Rising Star’ award to GFG was made by judges based on Group’s ‘growth, innovation, operational excellence, scope and financial results.’

According to the official criteria, the category is reserved for companies that exhibit an entrepreneurial spirit in transforming markets and re-evaluating established traditions to move the industry forward. It also acknowledges ‘courage, superior execution, brilliant marketing and nimble organisation.’

Judges chose GFG as the standout business in light of its dramatic global growth over recent years, which has seen workforce numbers climb to more than 12,500, and its ground-breaking GREENSTEEL strategy for sustainable steel production burst onto the agenda in many countries including UK, Australia, USA and India.  GFG was also nominated for a further six awards.

Accepting the award on behalf of the GFG Alliance Jay Hambro, who is the Group’s Chief Investment Officer and was himself nominated for CEO of the year for his role in running the Mining and Energy businesses of GFG said: “It is a delight and an honour to be recognized by your peers for this award.  We have a strong strategic vision for growth based on our core GREENSTEEL plan for long-term economic and environmental sustainability.” 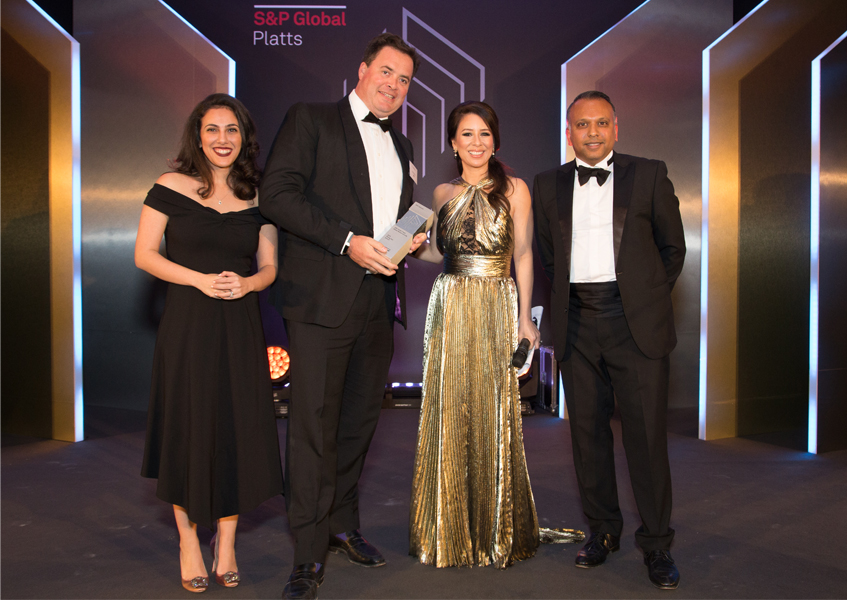 The GFG Alliance is a London-headquartered international group of businesses, founded and owned by the British Gupta Family, with a revenue of over US$12 billion and over 12,500 staff. It combines energy generation, metal manufacturing, engineering, natural resources and financial services, working together to deliver a common business strategy. The Alliance comprises Liberty – an integrated industrial and metals business – SIMEC – an energy, resources and infrastructure group – Wyelands – a banking and financial services arm – and JAHAMA Estates –the Alliance’s global property division. Through its GREENSTEEL strategy, the GFG Alliance promotes industrial revival based on low-carbon and sustainable production methods.