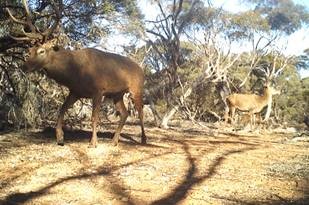 Images of feral deer captured near Kimba by the Eyre Peninsula Landscape Board, have raised concerns that deer populations are establishing in eastern Eyre Peninsula and that sightings are not being reported.

Eyre Peninsula Landscape Officer Rebekah Davenport, says it is important to prevent deer populations establishing on the Eyre Peninsula as they cause serious detrimental effects to agriculture and biodiversity.

“They also have negative impacts on native vegetation and important biodiversity that rely on these habitats, such as our vulnerable malleefowl populations.

The Department of Primary Industries and Region’s State Deer Control Coordinator, Jennifer Gillis, says that it is particularly important to eliminate deer during the current summer season.

“During these hotter months where feed is scarcer, deer can have more extensive impacts on crop and pasture biomass, and populations can potentially be displaced to new areas by fire,” Ms Gillis says.

Deer populations have typically established on Eyre Peninsula from historical escapees and the common species seen in this area is the red deer (Cervus elaphus). Under the Landscape South Australia Act 2019, landholders are required to control any feral deer found on their property.

Ms Davenport says that deer are cryptic, typically shy and active mainly in the early morning and evenings which should be taken into consideration when planning a control program.

“We rely on the community reporting deer sightings to track numbers and facilitate targeted control which can prevent population booms and major negative impacts to Eyre Peninsula,” says Mr Breuer.

“We know other parts of our state have well established feral deer populations, something we really want to avoid occurring here.

“An opportunity exists now to make sure feral deer don’t spread across our entire region, but we need community support to report sightings and control deer.”

Shooting is currently the only way to control feral deer. For more information about control methods for feral deer, see the feral deer page of the Department of Primary Industries and Regions (PIRSA) website.

Deer sightings should be reported on the feral scan website or by downloading their feral scan app.

Alternatively, sightings should be reported directly to Landscape Officers Rebekah Davenport on 0428 282 077 or Barbara Murphy on 0427 188 546 or email EPLBAdmin@sa.gov.au. More information about managing deer can be found on our pest animal page.