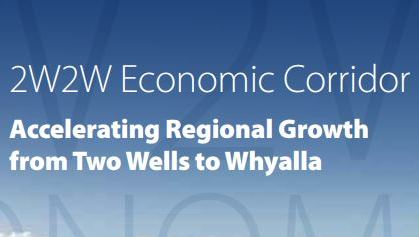 The 2W2W compendium and supporting video forms essential parts of South Australia’s investment tool kit, provided to inbound and outbound trade missions and potential foreign and domestic investors.  Both are readily available on the Primary Industries and Regions SA website.

2W2W is one of the state’s proven economic performers, with enormous potential for investment and growth. The corridor is poised to become one of the nation’s most vibrant and successful food production areas and an important industrial manufacturing and processing hub, with associated energy, transport and logistics support industries.

“The 340kms of fertile land running north from Two Wells, through Port Augusta and around to Whyalla is one of South Australia’s great economic achievers,” Minister Brock said.

“The economic corridor will be a vital tool in attracting more investment – and more opportunity – to South Australia.”

Background
South Australia’s growth and economic prosperity are closely linked to its regions, which contribute around $25 billion a year to the economy and produce more than half of SA’s merchandise exports.

2W2W has seen substantial growth over the past decade, through well-established and highly productive agriculture, access to secure water sources and a skilled labour force.
The potential of 2W2W will be backed by the State Government’s comprehensive $550 million Energy Plan, which will increase power security, boost competition and put downward pressure on prices.

Many of the measures contained in the plan are already taking place in or near 2W2W, including the Port Augusta Solar Thermal Plant, and Sundrop Farms – which is using world-leading technology to support solar electricity, heat and desalinated seawater to grow fruit and vegetables. The Whyalla steelworks was also recently purchased by GFG Alliance with the company announcing plans to expand output of the rebranded Liberty OneSteel facility.