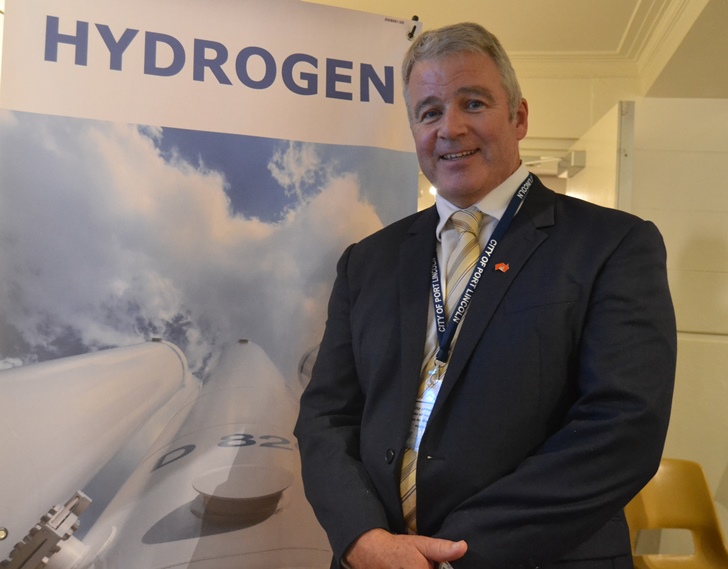 The South Australia government has announced funding for what will be Australia’s first renewable-hydrogen electrolyser plant – a 15MW facility to be built near the end of the grid at Port Lincoln on the Eyre Peninsula.

The “green hydrogen” plant – to be built by Hydrogen Utility (H2U), working with Germany’s thyssenkrupp – will include a 10MW hydrogen-fired gas turbine, fuelled by local wind and solar power, and a 5MW hydrogen fuel cell.

Both will supply power to the grid, will support two new solar farms and a local micro-grid, and will also include “distributed ammonia” that can be used as an industrial fertiliser for farmers and aquaculture operators.

The $117.5 million project, which will receive a $4.7 million grant and a $7.5 million loan from South Australia’s Renewable Technology Fund, is being described as a “globally-significant demonstrator project” for the emerging hydrogen energy sector.

It is the second biggest facility of its type, will boast the biggest hydrogen-supported turbine, and will also be the largest supplier of “green ammonia” in the world.
Hydrogen has often been dismissed as a viable technology because of the recent gains of electric vehicles and battery storage, but its proponents believe that it can create export industries to rival that of natural gas, and its added value chain can make it extremely valuable in the domestic market.

“More renewable energy means cheaper power and the ability to store renewables means the benefits of that cheap power can be experienced around the clock,” energy minister Tom Koutsantonis said in a statement.

“Hydrogen also offers an opportunity to create a new industry in South Australia where we can export our sun and wind resources to the world.”
The announcement continues a late rush of pre-election funding initiatives by the Labor government in the last few weeks, including for microgrids, virtual power plants, more grid-scale batteries, and five potential pumped hydro projects, scaling the range of storage options.

South Australia, which goes to the polls in little more than four weeks, already sources half of its electricity needs from wind and solar and will soon source even more as new projects come on-line, and hydrogen is seen as a major new opportunity.

“South Australia is at the global forefront of a broad range of storage technology, from big batteries, to virtual power plants to pumped hydro – now we will also be home to one of the largest hydrogen production facilities in the world as well,” Koutsantonis said.

The project at Port Lincoln will be nearly 10 times bigger than an electrolyser planned by the ACT government as part of its push to source 100 percent of its electricity needs through renewable energy.

Hydrogen is produced through a process called electrolysis which, in this case, uses surplus renewable energy from wind and solar plants to power an electrolyser to split clean water into hydrogen and oxygen.

That hydrogen can then be used to power fuel cell vehicles, make ammonia, generate electricity in a turbine or fuel cell, supply industry, or to export around the world.
H2U chief executive Dr Attilio Pigneri said the hydrogen gas plant and fuel cell will be able to provide balancing services to the national transmission grid, as well as fast frequency response support for new solar plants under development in the Eyre Peninsula.

Pigneri told RenewEconomy the electrolyser itself will provide fast response in the range of milliseconds, while the gas turbine and the fuel cell can put power into the grid.

He sees hydrogen as a viable competitor to battery storage for “end-of-grid” solutions, particularly from its ability to generate additional income streams such as ammonia.

The Port Lincoln facility will store 10 tonnes of hydrogen, equivalent to 200MWh.

It will support two new solar farms and a 5MW micro-grid to be built by a local tuna operator – many of which have been frustrated by recent blackouts, and the failure of the ageing diesel generators.

It will also supply green ammonia and other chemicals to local farmers and aquaculture operators.

“The project will provide the perfect training ground for a new wave of green hydrogen professionals,” Pigneri said in a statement.

“We are very lucky to be able to work with local academic institutions, such as the University of Adelaide, and the local energy market regulator, towards the establishment of training programs for certified operators, technicians and professionals that can support the growth of the industry.”

The project is supported by the local industry and community, including Regional Development Australia Whyalla and Eyre Peninsula (RDAWEP), the transmission network operator ElectraNet, and the South Australia No-Till Farmers Association (SANTFA).

“This project represents the things that we do best, collaborating to share innovation across many industries including energy, transport, education, farming, fishing and food production to be more sustainable and globally competitive,” Dorward said in a statement.

“Power firming initiatives are vital to improving liveability and strengthening the competitiveness of our existing industries.

“This project addresses these issues and offers so much more, the establishment of new supply chain capabilities will help the region to further diversify and prosper from the opportunities associated with growth in the green hydrogen economy.”